It was a case of one extraordinary man honoring another... 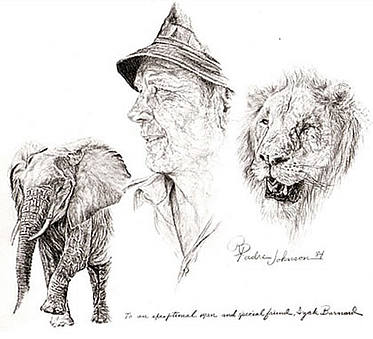 At the MacNaughton home in Sandhurst last weekend artist Ray “Padre” Johnson unveiled his character portrait of safari organizer Izak Barnard and presented it to him before an appreciative audience of wildlife and conservation organization members.

Speaking in a soft mid west drawl Padre first paid tribute to the exceptional experience and deeply caring understanding for nature of the man who had been his host in Botswana last year. (“Here was a man who knows his territory”).

The drawing, he explained “Juxtaposed a lion and an elephant show two major facets of Barnard’s character: a true leader with powerful memory for every corner of Kalahari and Okavango Swamps and a rugged personality, loaded with wit. For me he is also a ‘historical’ Afrikaner,” added Padre.

Padre himself is more than an artist. An ordained Lutheran priest and medical doctor he served in both capacities in Vietnam where he was wounded three times during a fierce engagement in the Mekong Delta that left him the only officer alive. (He later wrote a book about this experience).

Padre often takes time off from his other adventures to work as a simple ranch hand and this has inspired many of his paintings of horsemen, some of which are the collection of King, Gustav of Sweden. His next appointment is to present a portrait of Ronald Reagan to the American president, commissioned by members of Congress; and then he’s off on a painting tour which will take him as far as Mongolia.