Part and parcel of Penduka Safaris are the green 4x4 International vehicles, designed and built by Penduka's founder Izak Barnard. He fondly refers to them as his "Karre" 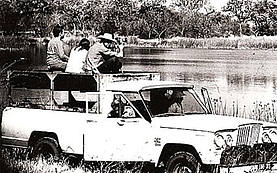 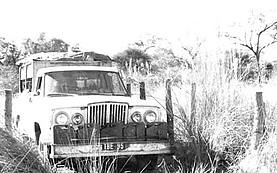 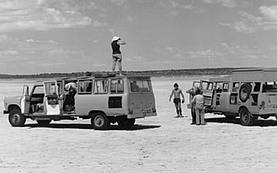 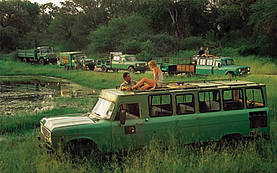 Over the past three decades, while driving his International 4×4’s, Izak Barnard has been stopped countless times by traffic officials. The opening line is always the same: “Sorry to stop you, but I just had to look at your vehicle. I’ve never seen something like this in my life.”

Izak Barnard 68, is the founder of the oldest safari company in Southern Africa, Penduka Safaris, which was established in the early 1960’s.

Today Penduka has a fleet of 14 Internationals comprising of:

After using a Jeep bakkie and a nine seater Jeep station wagon on his first safaris back in the Sixties, Izak decided the Jeeps were not strong enough for his needs.

He then considered Land Rovers. “But they were too narrow for the twin track sand roads and could not carry the loads we needed to carry. I then worked out exactly what I wanted and made a frame model of my idea. I considered leg space and then extended the chassis. I wanted the windows to be big and high for game viewing, with the frame strong enough in case of accidents,” Izak explained.

With this in mind, he bought his first 1968 International cab at a scrap yard in Windhoek, and the axles and chassis somewhere else.

As he didn’t have the necessary equipment then, his first International 14 seater bus was built under his supervision and with his help at Nic Smuts Auto Body Conversions in Randfontein in the early 1970’s, where he had earlier rebuilt the nine seater Jeep station wagon.

It took only one safari for Izak to fall in love with Internationals. He has since acquired all the necessary equipment and the conversions are being done in the workshop on his farm.

Through the years his unique international collection expanded.

Visiting the workshops on the farm, you will possibly find one of these internationals being stripped down to the last nut for a ‘full service’ and a re-spray. On one side of the workshop the assistants will be working on the chassis and the axles, while on the other side the body will be prepared for a re-spray or the interior for an upgrade.

Although the Internationals are considered “old”, the team continuously comes up with the new ideas and improvements. The latest internationals are fitted with comfortable bucket seats and new durable waterproof flooring. Additional black paint is added here and there. But the internationals have always had enough legroom, racks for books or cameras, large windows, hatches, steps by which to get in and out of the high vehicle and more than enough engine power.

All the vehicles were built from old internationals bought at scrap yards or from auctions. Izak stores more than enough second hand bodies and other parts such as fenders, gearboxes, steering wheels, axles and doors to make up a few more Internationals.

He has nearly 25 engines in stock and enough parts for 10 or so more engines. The parts are normally obtained from US connections in Johannesburg or sometimes imported directly form the US.

“There is nothing on the market that can replace these trucks,” Izak says firmly. “In America the Ford F350 Ultra duty with a V8 International diesel engine is equal to my 304’s, but it’s not available in South Africa. All Izak’s Internationals were rebuilt from the 1310 series. They are powered by five litre V8 engines and equipped with four speed T19 gearboxes and new process transfer cases. Each international has four petrol tanks with a total capacity of 350 to 400 litres. Depending on road conditions, the fuel consumption ranges from 3, 0 to 5, 5 Km’s / L

On the first day of a safari, clients sometimes look down their noses at the Internationals, which don’t come with the modern racing stripes, socially correct stickers or glittery metallic paint. However after a few days in grueling sand, after seeing other tourists cramped up in uncomfortable safari vehicles and realizing the full extent of the equipment loaded for a luxury safari, their view of Izak’s Internationals changes forever.